Recently I've been working with the JBoss AeroGear team. AeroGear is a new JBoss initiative focussed on providing examples, tutorials, and techniques to help developers get going with all kinds of mobile development.

We've been creating a 'proof of concept' integration between JBoss Forge and Metawidget for scaffolding mobile apps. Like the Forge/Metawidget/JSF scaffold, it uses static generation and doesn't require Metawidget at runtime. Unlike the JSF scaffold, however, the AeroGear scaffold generates a POH5/JQuery app. It's heavily based on Jay Balunas' excellent AeroGear Maven archetype - thanks Jay!

The Story So Far

An update on our progress. The plugin is hosted at https://github.com/forge/scaffold-aerogear. First download the latest version of JBoss Forge and run it. Then install the plugin:

Deploy the app (I tested on JBoss AS 7.0.2.Final, please try this exact version) and open it in an HTML5-compliant browser or mobile device (I tested on Chrome): 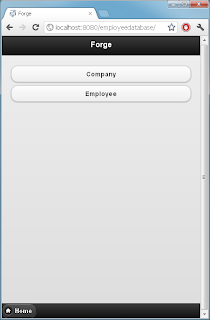 The opening screen displays a menu generated from the entities in your domain model. Here we're developing a little employee database. Click on Company: 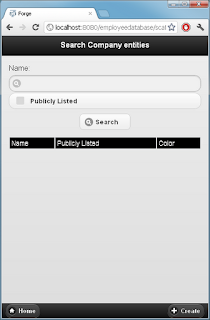 This screen allows you to search for existing companies. But we need to create some first! Click on Create: 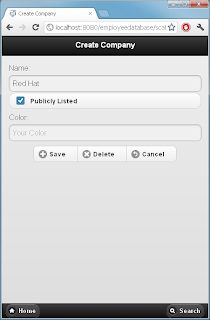 Fill out the fields as shown above. Things to note:
Click Save to return to the search screen: 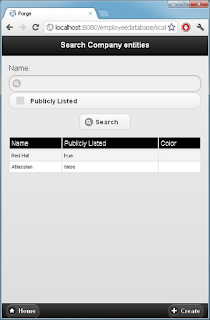 Things to note:
Click on a row in the table to view and edit it: 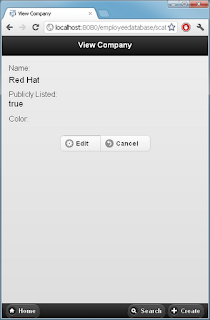 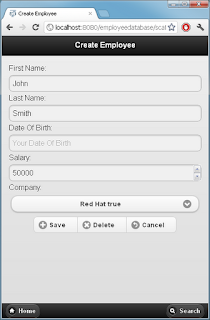 Things to note:
Click Save and create some more employees: 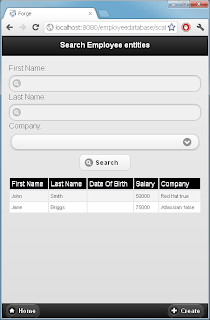 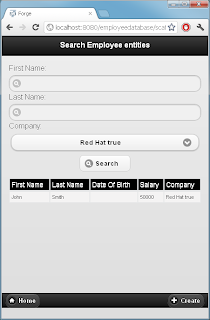 Things to note:
The Road Ahead

That's it so far! We hope this gives a compelling proof of concept for generating mobile applications using AeroGear, JBoss Forge and Metawidget. But there's lots more to do, so please join the community and start contributing!
Richard at 4:27 PM
Share